Steve McQueen and his Persol 714s: a legendary look

Is it the star who creates a style or does a style create the star? It’s not an easy question to answer when it comes to Steve McQueen and his Persol 714s, the sunglasses with lenses as blue as the star’s own eyes. This is the tale of two legends, that have become inextricably linked.

In 1968, Steve McQueen stepped onto a movie set for the first time, wearing a pair of Persol 714s. The movie is The Thomas Crown Affair by Norman Jewison and the actor is about to propel Persol into the realms of legend while reinforcing his own status. The Italian glasses label was already well known, but once they were seen on the ‘King of Cool’, their legendary status was sealed, reinforced by the aura of Hollywood and the star’s own undying charm. Many other stars were seduced by Persol’s ingenious elegance like Greta Garbo, Tom Cruise and Daniel Craig who wore them as part of his costume in Casino Royale, and George Clooney who schemed behind the lenses of his Persol 2157s in Ocean’s Thirteen. But the pince-nez, and in particular the 714s, will remain forever tied to Steve McQueen. 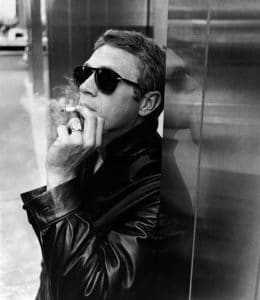 There have been plenty of legendary sunglasses in cinema, but the history that links Steve McQueen to Persol goes well beyond the scenes of a movie. The actor was crazy about the Italian glasses label, wearing them as much in real life as on screen. An avid fan of cars, he shared a passion with Persol which was originally created to protect the eyes of drivers. The Hollywood star had an impressive collection and managed to get them into The Thomas Crowne Affair at a time when sponsors didn’t write the rules on which accessories could be in a film. Playing a billionaire whose life is as boring as his bank account is full and who decides to add some spice to his life, the actor hides his blue eyes behind the blue lenses of the Persol 714s protected from the dangerously seductive gaze of Faye Dunaway. The frames were a hit straight away, charming audiences alongside the Seventies fashion icon and intriguing for another reason, one that had not been seen before: the glasses could fold up to the size of one lens, a technical innovation that was entirely unique at the time.

It didn’t take much for a whole generation to be marked by the brand and for McQueen to be engraved into the its history. In 2010, to pay tribute to the actor who had died 30 years earlier, Persol relaunched his favorite model as a limited edition, using his initials in its name, PO 174 SM. The folding system was reworked to make it easier to handle and the actor’s name was etched into the inside of the arms.

For anyone who fancies owning a pair of the actor’s own Persols, they should know that there was an auction in 2006 where the happy new owner of a pair paid the modest sum of $70,200. Happily, certain opticians collect vintage glasses and models from the period are available for (much) more affordable prices.

Well before appearing on the most well-known stars, Persol was born in 1917 in Turin. Giuseppe Ratti was the man responsible, a photographer and owner of an optical shop, who, not content with these two occupations, wanted to revolutionize and innovate the world of eyewear. His first model, the Protector, was originally designed for aviators and high-speed sports but their comfort and protection very quickly made them an object of desire, notably by the army. In 1930, still not content, Giuseppe Ratti decided to launch himself properly into the world of sunglasses and the label Persol, a contraction of ‘per il sole’ or ‘for the sun’ in Italian, was born.

With Hollywood still far from his mind, the 649 was first destined for the tram drivers of Turin with a large size that helped to protect their eyes from the air and the dust. Persol stood out with their innovations like Meflecto, the first system for flexible arms in the world that allowed the design to adapt to every face and considerably reduced the pressure on the temples. It was also the first time the famous Supreme Arrow was seen, a symbol still found today near the hinges inspired by Ancient gladiator swords. In 1961, everything changed when the Persol 649 was worn by the great Marcello Mastroianni in the film Divorce Italian Style beginning a long love story between Persol and Hollywood which culminated in Steve McQueen. If you’re still in any doubt about the relationship a star can have with their glasses, take a look at these quotes from stars about their glasses.